Sensory experience even early in life can shape our brains. For example newborns can recognize their mother’s voice and many parents play music to their infants trying to induce the ‘Mozart effect’. But how does such early sensory experience sculpt the brain? What circuits does experience act on? And why is the effect of this kin d of experience seemingly more powerful in early development than later in life?

To start answering these questions we haver to first identify what neuronal circuits are present in the young brain, evaluate the function of each circuit, and test how experience acts on each circuit.

It turns out that the young brain is structurally different from the adult brain (Chang and Kanold 2021). For example before and during the critical period a transient neuronal circuit is present in cortex. This circuit is formed by subplate neurons (SP) (reviewed in Kanold 2009, Kanold and Luhmann 2010, Kanold 2019, Kanold et al. 2019, Molnar, Luhmann, Kanold 2020). Subplate neurons were first described by Kostovic and Molliver (obituary) at JHU in 1974 and turn out to be among the first generated neurons in the cortex. Oddly, and in contrast to other cortical neurons, most subplate neurons disappear over development (Kostovic and Rakic 1984, Kostovic and Rakic 1990, Luskin and Shatz 1985). However, in early development subplate  neurons receive thalamic as well as cortical inputs and our work shows that they provide excitatory input to cortical layer 4 (see figure), the ultimate target of thalamic fibers (Hermann & Shatz 1994, Friauf & Shatz 1990, Friauf & Shatz 1991, Zhao, Kao, Kanold, 2009; Viswanathan et al. 2016, Deng et al. 2017). Thus, subplate neurons form a crucial relay of thalamic activity. We recently showed that these early thalamic connection transmit sensory information by showing that subplate neurons respond to sound stimuli before layer 4 is activated (Wess et al, 2017). We also showed that a  nascent topographic organization is present within subplate (Wess et al, 2017). Thus, there is an early ‘proto-organizational’ period where a rough sketch of cortical organization is slayed out in subplate. Where would such a template of the future cortical organization come from? It turns our maybe from the subplate (Meng et al. 2021)! 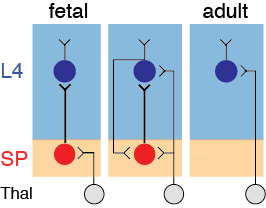 Our previous work and the work of others showed that loss of subplate neurons during development leads to severe developmental malformations. Without subplate the topographically pattered connections between thalamus and layer 4 do not develop  (Ghosh et al. 1992, Kanold et al., Science 2003, Tolner et al 2012). Our work points to functional deficits underlying these anatomical malformations. Without subplate neurons the connection between thalamus and layer 4 as well as inhibitory transmission within layer 4 do not mature  (Kanold et al., Science 2003, Kanold & Shatz Neuron  2006, Tolner et al 2012). The result is that layer 4 is not driven by thalamic inputs. Given that neural activity is required for synaptic strengthening these functional defects are consistent with the observed anatomical deficits after subplate lesions. Thus one role of subplate is to act as a “teacher” helping thalamic inputs to connect to their targets in layer 4. We recently showed that changing peripheral inputs( by using genetic deafness models or sound exposures and deprivations) can alter subplate circuits before thalamic fibers activate layer 4 (Meng et al. 2021, Mukherjee et al. 2021). This means that subplate neurons seem to be the first substrate of experience dependent changes in the cortex. This is important as most prior studies of experience dependent plasticity timed sensory manipulations based on events in layer 4 and thus have changed experience too late to alter subplate neurons.

To accomplish our goals we use a multi-faceted approach utilizing neurophysiological (electrophysiology and imaging) and molecular techniques as well as computer simulations of the behavior of single neurons and neuronal networks.

Subplate neurons are present in the human cortex during prenatal and early postnatal times, depending on the region of cortex. In fact in the second trimester a large fraction of cortex is occupied by subplate neurons. Subplate neurons are are highly susceptible to injury, especially in the womb. Short episodes of hypoxia (such as occurring during birth!) selectively damage subplate neurons (see here), and we show that even “mild” injuries cause altered subplate circuits (Sheikh, Meng et al. 2018). Such hypoxic episodes in humans are thought to be related to the development of cerebral palsy and other disabilities many of which are associated with aberrant cortical activity. Similarly our work showed that fetal exposure to VPA, which is linked to the autism in humans (review1, review2, review3), results in altered circuits to subplate neurons in neonatal animals (Nagode et al. 2017). Thus changes in the cortical circuitry in autism are present in the developing cortex from the youngest ages on.

Since subplate neurons are the first neurons to respond to sensory stimuli (Wess et al. 2017), changes in subplate circuits would result in changed sensory processing and such changes could be used diagnostically.

Thus learning more about the subplate and its function is important in understanding the origin ofneurodevelopmental diseases (Kanold et al. 2019, Molnar, Luhmann Kanold 2020).